It’s been such a busy, beautiful, productive week that I’m not even sure where to start! It was gorgeous and sunny for my brother’s entire visit, and with his 6’4″ of help I was able to make some admirable progress on the Nid. We’re now all ready to put in a temporary loft floor to use as scaffolding for building the roof and walls, having erected and trimmed all of the loft posts and the four tallest posts for the main roof. It was a week of a little carpentry, a little chainsawing, and a little masonry…plus the concrete pour to make the sill for the front door. Whew! 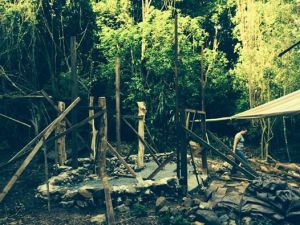 While Tristam was here we did get to do some fun stuff as well as working him half to death (hey, he offered!). We went snorkeling under the cruise ship pier in Frederiksted where there are lots of fish and coral, though the seahorses that can usually be found there seem to be taking a vacation…hopefully accruing less sunburn while they are away than Tristam did while he was here! The requisite hike was made out to Ham’s Bluff Lighthouse, an old metal lighthouse in rather a sad state since it was replaced by a newfangled solar-powered light – much less picturesque than the old one, with its spiral stairs, outside walkway, and black and white stripes. I’d lasted almost three months without setting foot in a restaurant, but Tristam broke that by taking us out to try Pink Spot in Frederiksted. It’s a great little place to spend an evening, with a full bar and a delicious tapas-style menu, fronting on Strand Street with a lovely courtyard out back. The menu is small, but everything we tried was good!

Before I go into the cooking of the week, I should introduce our new nieghbours, who shall remain unnamed…for the day that they go into the stew pot. For now, they are three happy, fluffy, clucky hens, bought as year-old layers from Jane Coles of Cole’s Funky Chicken Farm just down the road – a small family/hobby operation of goats, chickens, ducks, turkeys, guinea pigs, and rabbits. I decided to get “settled” hens (read older) as I don’t need that many eggs, and think these will be slightly calmer and a good learning curve. Once their laying tails off I can replace them with younger hens, or decide to raise chicks, depending on where I’m at by then. Currently they are settling into the chicken tractor, safe from predators and able to be moved to fresh ground each day. Better photos soon!

My big cooking accomplishment this week was learning to make pita bread. For some reason I’d always thought it would be difficult to make, or that the pockets wouldn’t form, or they required special ingredients. However, a neighbour lent me one of her many fabulous cookbooks, and I couldn’t resist trying out a pita recipe – the most simple I’ve ever seen, flour, yeast, salt, and sugar. Start to finish takes less that 45min, so I made them for lunch twice in a week! They all formed immaculate pockets, each batch cooking for a mere 4 minutes before emerging, delicious, fully puffed, just the slightest bit browned on the bottom while still soft and chewy on the top…hands down they are the best pita I’ve ever had.

This is the first week that you can get my products through VI Locally Grown where you can order online now through 7pm on Tuesday, for pick up 3:30-5:30pm Wednesday in the courtyard behind Polly’s in F’sted. You will still be able to place orders here at Nidulari for the Saturday baking, and buy other products directly from me then as well. Locally Grown is advantageous to you, as it means that you can order from multiple farmers and pick everything up in one place while supporting local small farms and cottage industries. Please give it a try!

That’s it for this week, come tomorrow morning we’ll be hard at work with our very first WWOOFer, Aaron, showing him the ropes and working some more on the Nid! Come egg us on in the comments section, or tell a friend about Nidulari and the delicious bread you get from us – it’s always more fun when people interact. Cheers!