It was a rainy week; we don’t need to talk about that, do we? The ground is mush, nothing can be dug, laid, planted, or transported without being mired in huge clods of soil. Everything and everyone has been wet through at least a dozen times, and today it looked clear so we did laundry…that will never dry. So, the chainsaw has been sharpened, all the inside work possible has been done (we were lucky to have power most of the week despite the heavy rain), and now, for me at least, it’s a matter of waiting for the ground to dry out enough to haul a truckload of gravel up my mud driveway, and then continue on as planned.

Baking this week was a tad scary, between driving out West from where I’m house sitting at 5am amid heavy rain, to baking a couple of hours later amid a thunder storm with lightning strikes just across the valley every few minutes. All was well in the end, as while I may have been soaking wet at least the bread stayed dry! I’m told that the contestants in the Coconut Cup Paddle Festival at Frederiksted beach greatly enjoyed my bread – ordered by Freedom City Surf for the contestant lunch – which certainly made my day! Despite being able to bake in the rain, I’m almost ready to start making sacrifices to the weather gods so as to have dry weather on Saturdays…

Instead of going on and on about the weather – in a typically British manner – let me say a little about Mother’s Day. Now, I’m not one to go all gaga over what have mostly become meaningless hallmark holidays, but if you have a chance to make someone in your life happy, then why not grab it? I have a pretty decent mother, after all…otherwise how could I have turned out quite this amazing? Seriously though, homeschooling two kids, taking us to live in so many places and to see so many things, and perhaps most of all giving us freedom to learn and explore for ourselves; it can’t have been easy, and she did a great job of it despite sometimes difficult circumstances. And so it came about, a 6′ tall carambola (star fruit) tree, and a massive Indian dinner for three. Carambolas have always been one of Mandy’s favourite fruits, and one of the few fruits that we do not have growing at Little La Grange. When we first moved here we’d planted a very puny tree which didn’t take off, whether due to nature or neglect, so some 8 years later I’ve decided that it’s time for another try! In that time we’ve learned a lot about planting and nurturing trees, giving them enough sun, the correct amount of water, etc – so hopefully this time we’ll have more success and soon be able to add carambolas to our (quite vast, if I may say so) list of home grown fruit. So far it’s looking very happy!

The dinner was pretty damn impressive, and was devoured with a gorgeous view of Salt River and a slightly chilly (a treat here) sea breeze. Evidently my time in India was not wasted, for I brought home with me a degree of authenticity to my Indian cooking unparallelled by most restaurants, let alone casual (or not so casual) cooks. Over the course of half an afternoon, in an unfamiliar kitchen, I produced five curries, rice, garnishes, and a dessert. For the curries I made some of my favourites: aloo dum (potatoes in a thick tomato and yoghurt curry), brinjal ginger fry (delectable baby eggplants with ginger, spices, lime, and cilantro), black dal (a creamy dark dal made with brown lentils), chana masala (chickpea curry), and an experiment, beef curry (pretty good, but has some room for improvement due to having been vegetarian while in India). I would have liked to make roti to accompany the meal, but as I was cooking on an electric stove that was not possible. Next time! The dessert was chocolate mousse, rich and creamy, topped with rum whipped cream – it must have been good or we would have been far too full to eat it. 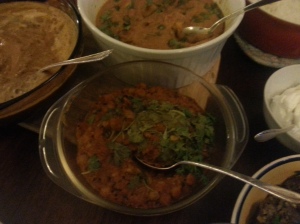 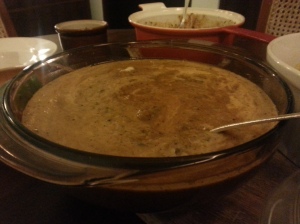 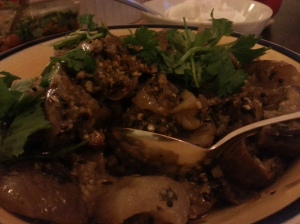 So, who’s up for a curry night?

One thought on “Mothers in mayhem”