It’s been another exciting week here at the Nid building site! As of last weekend I’d only just started to dig the trench for the foundation, and by now I am already starting to lay up the wall from the base layer of (very large) stones. Sand and cement is being acquired – my first bought materials – rocks are being hauled from the fallen parts of the ruined buildings and various piles around the property, and the details of the plan are coming along as I wait for the construction gods (aka the dump) to drop a sliding glass door or double french window in my lap. I’ve been ever so fortunate this week to have an old friend helping out with the Nid project, lending lots of muscle and energy in digging and moving rocks, as well as providing great company, which has put me a week or more ahead of where I’d otherwise be! I’ve also been taught the real meaning of a 10 hour work day: hard labour, in the sun, through the remorseless heat of the day. Builds personality.

The foundation ditch ranges between 8″-12″, at about 18″ wide. The rear area (bathroom and storage under the loft) is dug out about 8″ deep throughout, to give a little more headroom below the loft floor. The rest of the floor is being leveled, and ultimately will be about 4″ above ground level, to give maximum drainage below. The bottom of the trench has a layer of large – as large as could be practically lifted and wheel-barrowed – rocks, each well bedded into the clay soil, flat side down, fitted as snugly together as possible (I have an uncanny eye for this particular process). 3″PVC pipe has been placed on the base layer of foundation rock, through which the eventual 2″ drain pipes for the shower and sink can be run.

Meanwhile, water and power have been run to the Nid site, and there’s now a “two lane highway” to get to the Nid. By which I mean a wide enough trail to get not only the wheel barrow up, but also our little cement mixer…who’s wheels I had to remove today for a little TLC before we attempt to move the poor little beast tomorrow. 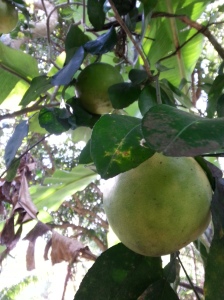 Of course there are a million things going on at once, and the first “real” production run of bread is happening this Sunday! Last chance to order is Friday evening (3/28), pick up Sunday at Noon. This time around there is a choice of wholewheat or cooked-grain (contains whole brown rice) bread, in a medium loaf or 6 rolls for a $6 donation to the Nidulari tiny house fund. Orders can be made via email – next week I hope to publish the new tab which will include an online order form.

Don’t forget to “follow” Nidulari so that you get notified of new posts! Cheers!